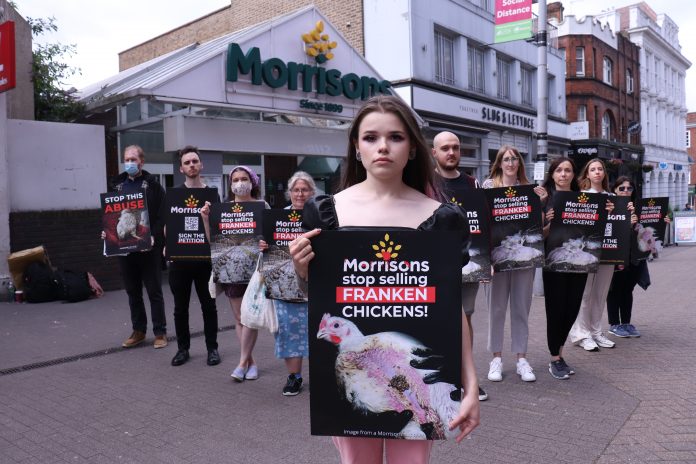 Dozens of Morrisons stores up and down the UK were met with protests on Saturday from animal welfare campaigners over allegations about the chicken it sells.

Doug Maw, a Morrisons employee facing disciplinary action for taking part in an animal welfare campaign, spearheaded the protests outside the retail giant’s stores in Liverpool, Manchester, Dundee, Bristol, London, Sheffield, and Reading, among others.

Campaigners from charities Open Cages, Animal Equality UK, and The Humane League UK are calling on Morrisons to sign the Better Chicken Commitment (BCC) – a policy created by animal welfare experts to address the worst forms of suffering endured by chickens in grocery and food supply chains.

Maw first took part in the charities’ “Morrisons Misery” campaign by signing a petition and sharing a link in the Big 4 grocer’s internal Facebook group.

He was subsequently called into a meeting and told the post was inappropriate, as reported by The Independent, and a disciplinary hearing process is still ongoing.

The footage prompted protestors to hold up placards accusing Morrisons of producing “FrankenChickens”.

Maw said: “I’ve been a passionate advocate for animal welfare for decades.

“Morrisons has made me feel unwelcome as a member of staff and questioned my commitment to the company for putting my values first.

“I believe we all have a responsibility to hold the companies we work for to account, and encourage them to do better. That’s how we move things forward.

“When I saw for myself just how bad the conditions are in the recent investigation, I knew I had to do something bigger, and that’s why I’m exercising my rights to protest.”

In response to Open Cages’ investigation, Morrisons said: “We care deeply about animal welfare and require all our suppliers to maintain the highest standards.

“We have asked [the supplier] Cranswick to conduct a full investigation and report back to us.”

Cranswick has also apologised for the footage featured in Open Cages’ investigation.

“We have been made aware of footage of our farms, filmed by Open Cages, following on from a number of separate incursions,” a spokesperson said.

“The film shows a small number of our chickens suffering on farms operated by Cranswick and these birds should have been removed as part of our standard high welfare procedures.

“The team at Cranswick would like to apologise for the recent footage. We have investigated this thoroughly both internally and with the support of unannounced external audits.

“Whilst we are confident that the occurrences are isolated we have identified procedural improvements to our farming system that have been implemented to significantly reduce the likelihood of an issue occurring in the future.”

They added: “We are extremely proud of our long-standing reputation for maintaining excellent standards of animal welfare across the business, and this will always be our top priority.

“All of our chicken farms operate to the accredited standards of the Red Tractor mark and have a long-standing track record of excellent independent audit results.

“We also frequently review and invest in projects that further enhance welfare such as our recent introduction of in shed hatching for all of the chickens we grow.”

The Humane League said that over one billion chickens are raised and slaughtered for their meat in the UK every year, the vast majority of which are bred to grow at an unnatural speed, reaching slaughter weight in just a matter of weeks.

“They can suffer painful lameness and even heart attacks because of their fast growth, and are raised in cramped conditions,” the animal welfare charity added.

The BCC offers an affordable, realistic alternative and prohibits the use of fast-growing breeds while also providing natural light, enrichment, and more space – and also requires third-party auditing.

The only UK supermarkets to have committed to the BCC so far are Marks & Spencer and Waitrose.